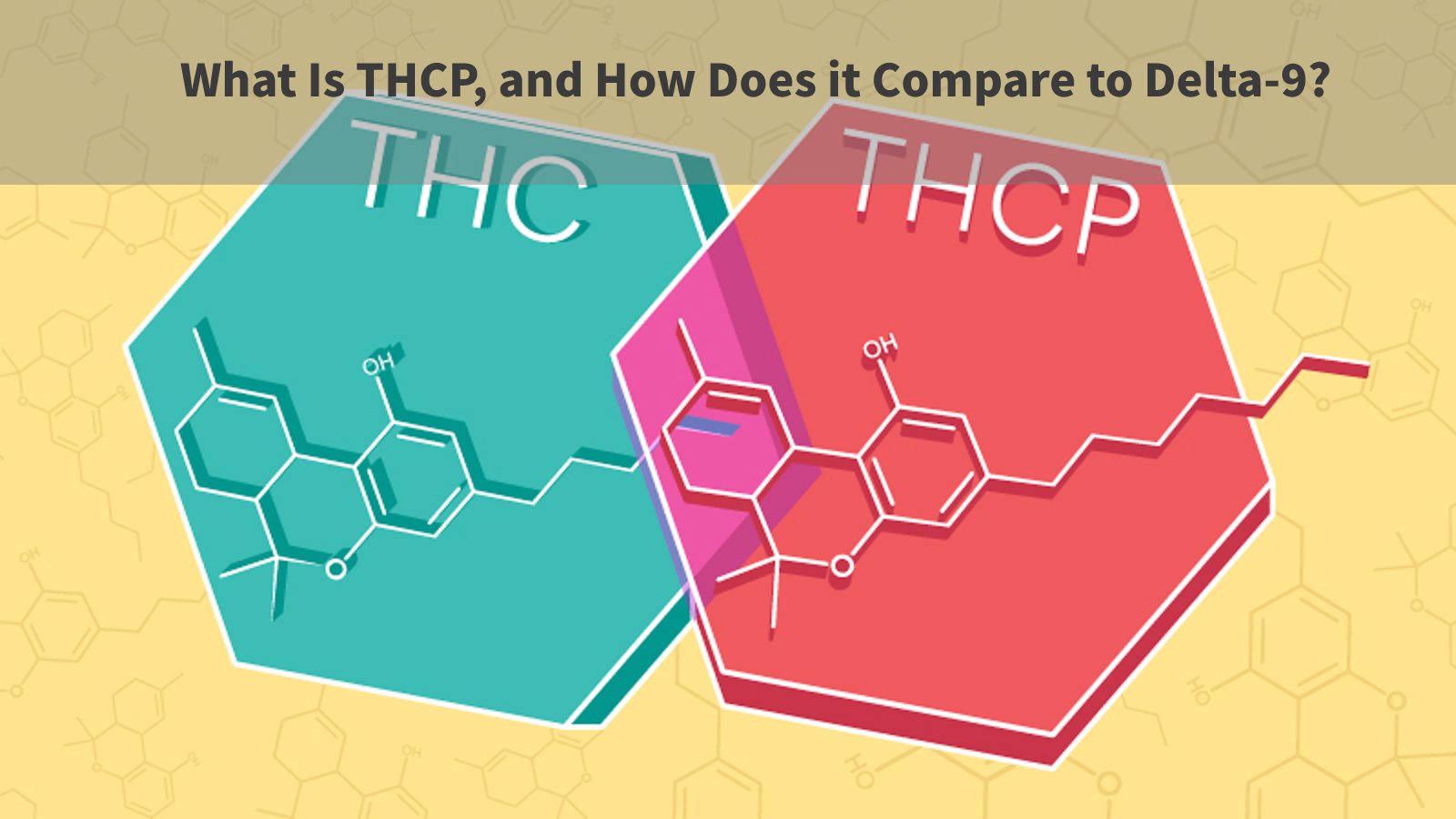 You may also be aware of delta 8 and delta 10 THC — two slightly different molecules with similar psychoactive effects.

There are, in fact, dozens of different types of THC. Some are much stronger than others.

In this article, we’re going to cover the strongest member of the THC class — THCP — a cannabinoid with more than 30 times the potency of conventional delta 9 THC from marijuana.

THCP stands for tetrahydrocannabiphorol. It was discovered as recently as 2019, so there hasn’t been much (if any) official research on its effects quite yet. The only research we do have has been exploring its safety and potency using animal and in vitro cell cultures.

Here’s what we know so far.

THCP exists naturally in cannabis plants — albeit in very low concentrations. It can be extracted and isolated from hemp and marijuana using chromatography techniques.

This cannabinoid appears to bind to the CB1 receptors 33 times more often than delta 9 THC. Activation of the CB1 endocannabinoid receptors is what gives THC and THCP their psychoactive effects.

Yes! THCP is one of the 140 phytocannabinoids found in cannabis.

However, natural levels of THCP are well below 0.1 percent. Some plants, such as the Italian-bred FM2 strain, contain almost 0.1% THCP.

For comparison, THC can be found in concentrations of 25%-30% in marijuana and around 0.3% or less in hemp.

CBD is usually present in concentrations between 20% and 30% in hemp and around 15% in marijuana.

How Is THCP Made?

Because of the extremely low concentration of THCP in cannabis, researchers need to recreate THCP artificially in order to study it further.

The first paper reporting THCP extraction from a cannabis plant wasn’t published until 2019 and was later adapted to develop the manufacturing process that’s used today.

CBD is used as the starting material to make THCP — which means it can be effectively derived from hemp.

Virtually all cannabinoids in cannabis and hemp plants, including THC, CBD, and THCP, begin their life as cannabigerolic acid (CBGA).

Without turning this article into a chemistry lecture, suffice it to say that CBGA undergoes an enzymatic reaction with other acidic compounds in cannabis to create a precursor molecule for THCP called tetrahydrocannabiphorolic acid (THCPA).

THCPA is then slowly converted to THCP by the cannabis or hemp plant through a process called decarboxylation.

Delta 9 THC is the only cannabinoid scheduled by the Convention on Psychotropic Substances, meaning that THCP is internationally legal. THCP’s legality is slightly different In the United States, where it is legal as long as it is derived from hemp plants and not marijuana plants.

However, it’s not always that clear-cut — especially when it comes to cannabis. Each state has the ability to form its own laws regarding cannabis, so while THCP may technically be legal on a federal level, it could be subject to independent state laws.

Currently, THCP is not mentioned on any state bill but is illegal in states that ban all forms of THC.

States where THCP is illegal:

As marijuana legalization continues at the state level in the United States, rules and regulations are subject to change.

The 2018 Farm Bill is the relevant legislation to consult for information about the federal legalization of cannabis and cannabis-derived products.

You’ll have to check with your state’s legislature for more detailed information at the state level, as each state has its own laws regulating THC as well as analogs like THCP.

THCP VS. THC: What’s The Difference?

THC and THCP share nearly identical chemical structures with one crucial difference: the length of their alkyl side chain.

THC’s chain is a five-carbon atom chain, while THCP’s has seven carbon atoms.

What Are The Effects Of THCP?

Many THCP users describe the effects as a more pronounced version of THC. It’s stronger (almost psychedelic), so you need a smaller dose to experience the same general effects as THC.

Current research about the effects of THCP is scarce, but people who have tried THCP report that its effects are virtually indistinguishable from THC’s effects.

The original 2019 paper reporting the first detection of THCP in a cannabis plant claims that the physiological effects include pain relief and suggests that THCP might share many medicinal effects with THC.

Even though THCP and THC may share many benefits, there is one key difference.

THCP is 30 times more biologically active than THC and, therefore, also has proportionally stronger effects. This means the dose of THCP and THC are going to be very different.

As such, it is important to tread lightly, especially if you’ve ever experienced adverse side effects from THC use, like anxiety, memory loss, or paranoia.

How Does THCP Work?

CB1 receptors are located in the nervous system and are responsible for the psychoactive properties of THC and THCP.

Like THC, THCP is a strong CB1 agonist, meaning it binds with the receptor and causes an effect. Since THC and THCP have the same CB1 behavior, their pharmacological effects are similar.

How Do You Take THCP?

Right now, there are relatively few THCP products available, but you can expect this to change in the near future.

THCP can be used the same way as any other cannabinoid. It can be vaped, smoked, eaten, taken sublingually, or even applied to the skin.

Most companies that are selling this cannabinoid right now sell it in the form of a replaceable vape cart.

Does THCP Get You High?

THCP seems to have an almost identical effect profile to THC, according to many people who have reported trying THCP.

How Does THCP Compare To Other Cannabinoids?

THCP is much, much stronger than delta 8 THC (roughly 60 times as strong).

The effects of these cannabinoids are very different as well. THCP can be quite stimulating. This, combined with its exceptional potency, makes THCP very likely to result in anxious side effects, insomnia, and rapid heart rate.

Delta 8 is the total opposite — it’s has a milder and far more relaxing and mellow feeling. Delta 8 THC is unlikely to make users feel anxious or negatively affect sleep.

There is theoretically a delta 8 version of THCP too — but so far, there’s no information on how it compared to delta 9 THCP. The process for determining the potency of THCP products isn’t refined enough to tell the difference between the delta 8 and delta 9 isomers either.

THCP and delta 9 THC have essentially the same effects. The only difference is the potency levels.

The normal dose of delta 9 THC is around 10 mg. The equivalent dose of THCP is closer to 0.3 mg (300 micrograms). You don’t even need a full milligram of THCP for potent effects.

Because of how strong THCP is, it’s much more likely to lead to side effects than conventional THC products.

Delta 10 THC is generally used during the day as a sort of nootropic. It’s more stimulating than delta 8 THC and delta 9 THC without affecting headspace too much.

Compared to THCP, delta 10 THC is much milder and has far less impact on headspace. THCP will really alter your mental capacity to do stuff like work or study — while delta 10 THC (in low to moderate doses) is often used to enhance it.

The main differences between THCP and THCO involve the origin (THCP is naturally occurring, THCO is fully synthetic), the onset time (THCP kicks in right away, THCO has a delay), and the potency (THCP is around 10 times stronger than THCO).

HHC (hexahydrocannabinol) is another new cannabinoid to enter the market. This one is much more similar to delta 9 THC than THCP. HHC shares virtually identical effects as delta 9 THC and is only slightly weaker.

You may just need an extra puff or two on an HHC vape to get the same intensity of effects as delta 9 THC.

Key Takeaways: What Is THCP?

THCP is a cannabinoid of the future — sitting on the cutting edge of cannabinoid science.

The cliff notes version is that THCP is a stronger, legal version of delta 9 THC.

THCP products are difficult to find thanks to the difficult manufacturing process, but the lucky few who have gotten their hands on some report that it feels like taking THC (just beware of the dose).

Category: THC-Blogs
Tags: THCP, THCP Vs THC, what is THCP?