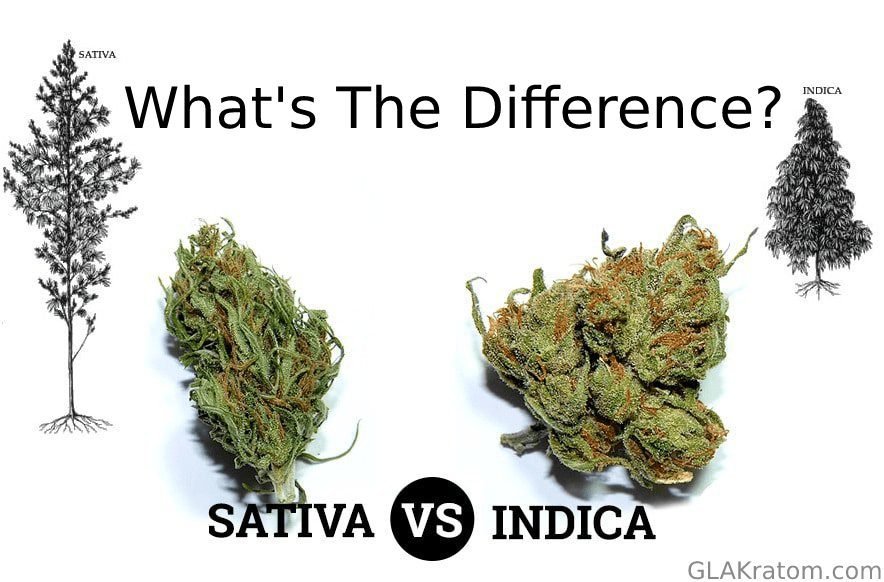 As marijuana use for both medical and recreational purposes becomes legal in more and more states, there is a growing interest in the different effects that various types, including indica and sativa, can produce.

Understanding The Basics of Indica vs Sativa

When cannabis consumers think of “Indica” vs. “sativa” marijuana strains, they generally think that indica strains are physically sedating, perfect for relaxing with a movie or as a nightcap before bed, and sativa strains are energizing with uplifting cerebral effects that pair well with physical activity, social gatherings, and creative projects. Hybrid strains are thought to have a mix of indica and sativa effects.

But indica doesn’t always mean “couchlong,” and sativa doesn’t necessarily energize all of its consumers. As research opens up and we learn more about the cannabis plant, it turns out the chemical compounds in each strain—the cannabinoids and terpenes in it—determine the effects you’ll feel, not whether it’s an indica or sativa. In fact, the origins of those two terms are rooted in botany, not effects.

However, even today, the belief that indicas, sativas, and hybrids deliver distinct effects is still deeply rooted in mainstream cannabis culture. If you’ve ever been to a dispensary, you’ve likely heard a budtender begin a strain recommendation by asking which of those three types you prefer.

Let’s look at where the terms “indica,” “sativa,” and “hybrid” actually come from, and how a cannabis strain’s chemical profile interacts with your unique body to make you feel effects.

The Origins of ‘Indica’ and ‘Sativa’

The words “indica” and “sativa” were introduced in the 18th century to describe different species of cannabis: Cannabis sativa and Cannabis indica. The term “sativa” described hemp plants found in Europe and western Eurasia, where it was cultivated for its fiber and seeds. Cannabis indica refers to the intoxicating varieties discovered in India, where it was harvested for its seeds, fiber, and hashish production.

Here’s how terms have shifted since their earliest botanical definitions:

Although the cannabis varieties we consume largely stem from Cannabis indica, both terms are used,even if erroneously, to organize the thousands of strains circulating the market today.

So if indica and sativa aren’t the best predictors of effects, what is?

The effects of different strains of weed depend on a number of different factors, but mainly on the cannabinoids and terpenes in the strain, or the chemical compounds in it.

The cannabis plant is composed of hundreds of chemical compounds that create a unique harmony of effects, which is primarily led by cannabinoids. THC and CBD are the two most common cannabinoids and are the main drivers of cannabis’ therapeutic and recreational effects.

Cannabis contains dozens of different cannabinoids, but start by familiarizing yourself with THC and CBD first. Instead of choosing a strain based on its indica or sativa classification, consider basing your selection on these three buckets instead (both indica and sativa strains exhibit these different cannabinoid profiles):

If you’ve ever used aromatherapy to relax or invigorate your mind and body, you understand the basics of terpenes. Terpenes are aromatic compounds commonly produced by plants and fruit. They can be found in lavender flowers, oranges, hops, pepper, and of course, cannabis. Secreted by the same glands that ooze THC and CBD, terpenes are what make cannabis smell like berries, citrus, pine, fuel, etc.

One question yet to be answered by research is how terpenes—and different combinations of those terpenes – shape the effects of different cannabis strains.

There are many types of terpenes found in cannabis, and it’s worth familiarizing yourself with the most most common—especially myrcene, caryophyllene, limonene, and terpinolene, since they’re the most likely to occur in pronounced levels in cannabis.

Biology, Dosing and How You Consume Cannabis

Additionally, your tolerance to cannabis, the amount you consume (dosage), and the consumption method will also determine how a strain affects you. Consider the following questions when looking for the right strain or product.

How much experience do you have with cannabis? If your tolerance is low, consider a low-THC strain in low doses.

Are you susceptible to anxiety or other side effects of THC? If so, try a strain high in CBD.

Do you want the effects to last a long time? If you do, consider edibles (starting with a low dose). Conversely, if you seek a short-term experience, use inhalation methods or a tincture.

There are many factors to consider when choosing a strain, but if you find that indica strains consistently deliver a positive experience, then by all means, stick to what you know. However, if you’re still searching for that ideal strain, these are important details to keep in mind.

What’s A Sativa and It’s Effects?

While not all sativa marijuana strains will energize you, most consumers notice a tendency for sativas to produce a “head high,” an uplifting, stimulating effect. They also often report sativas as being helpful in mitigating stress or anxiety, and many consumers enjoy sativas to sharpen focus and boost creativity/motivation.

Common effects associated with sativa strains include feeling happy, uplifting, euphoric, and energetic. Sativas are often thought of as “daytime” strains, used for feeling productive, creative, and focused, and for getting chores done.

What’s An Indica and It’s Effects?

Not all indica strains will put you in a “couch lock,” but nevertheless, many consumers associate indicas with full-body effects, for example, heavy limbs or a tingly face. They also report indicas as being helpful in aiding relaxation and curbing insomnia.

Common effects associated with indica strains include feeling relaxed, euphoric, happy, and sleepy. Indicas are commonly known as “nighttime” strains, used for relaxing and unwinding at the end of the night.

What Does Is A Hybrid Strain and Does That Influence The Effects?

Hybrid strains are bred from both indica- and sativa-descended plants. Due to the long history of crossbreeding cannabis strains—much of it was historically done underground to evade authorities—strains that have pure indica or pure sativa lineages are rare. Most strains referred to as “indica” or “sativa” are, in fact, hybrids, with genetics inherited from both subspecies.

Since hybrid weed strains derive genetics from indicas and sativas, their ensuing effects can also pull from both indica and sativa strains. Common effects include happy, euphoric, uplifting, energetic, relaxing—it all depends on which hybrid you consume and what effects its “parent” strains are known to produce.

Looking at a hybrid’s lineage (its parent strains) may give you a better sense of what kind of effects it will produce; for example, if it has more indica in its lineage, it might have effects more associated with those strains.

Some of Our Popular Delta 8 strains

Sativa Strains we carry include,

Some of the Indica Strains we carry include,

We also carry some of the more popular hybrid strains, to get the best of both worlds.

Anecdotal evidence suggests that sativa is more energizing and indica is more relaxing, but the scientific reality is far more complicated. In fact, many different chemical compounds are involved in creating the medical and recreational effects of cannabis.

Although there may be some truth to the differences between the two plants, it is important for a person to look at the biochemical content of the individual strains in order to choose the strain most suited to their needs.

Even within the specific strains, research has proven that there is a huge possible variation in THC content, which suggests that the same is true for other cannabinoids

How Does Delta 8 THC Compare to Delta 9 and CBD? – Indica Vs Sativa, What’s The Difference?