Many people use tetrahydrocannabinol (THC) to obtain numerous associated benefits and for recreational purposes. However, there’s confusion on the legally available types of THC. So, we will cover extensively how Delta 9 THC and Delta 8 THC match up and which a user should choose.

Delta 9 THC was the earliest cannabinoid discovered in 1964 and has been extensively researched and used. On the other hand, Delta 8 is lesser-known, though it is of great importance. Delta 8 THC and Delta 9 THC mainly differ because Delta 9 is more psychoactive than Delta 8.

What is Delta 9 THC?

Delta 9 THC is a cannabinoid in the cannabis plant and is the primary psychoactive substance. It induces a high feeling in its users by acting on the CB1 and CB2 receptors in the brain. Therefore, products that contain Delta 9 THC are potent. It is entirely safe for consumption, although it’s necessary to follow the correct dosage. Recently, people have been consuming delta 9 THC as gummies rather than smoking joints to attain an extreme euphoric effect.

What is Delta 8 THC?

Delta 8, is one of the many cannabinoids in the industrial hemp plant. It can be ingested as a pill or by smoking. It has all the benefits you can get from THC but with less stimulation than Delta 9. This less dramatic stimulation is because Delta 9 THC is more potent than Delta 8 THC. Unimed Pharmaceuticals patented it in 1985, but it was not until 2003 that it became popular. Currently, Delta 8 is legal in 32 states in the US.

Federally legal Delta 9 THC is present in hemp extracts in smaller quantities than in illegal marijuana extracts. The hemp plant should contain 0.3% or less Delta 9 THC on a dry weight basis.

Delta 8 THC, a minor cannabinoid, requires a lot of effort to extract, unlike Delta 9 THC. Therefore, its extraction is highly unfavorable. Fortunately, there exists another method to obtain Delta 8. Researchers discovered that solvents could synthesize Delta 8 entirely from cannabidiol. Although this process is expensive, it has simplified the production of Delta 8 products. Like Delta 9, Delta 8 is obtained from hemp that usually has a higher concentration of cannabidiol. The hemp plant should also contain 0.3% or less Delta 9 THC on a dry weight basis.

Molecular Structure of Delta 8 and Delta 9

States Where Delta 8 is Illegal

Delta 8 is illegal in the following states:

Delta 9 THC is also legal at the federal level, as long as it is obtained from hemp. The 2018 Farm Bill permits 0.3% or less Delta 9 THC in products. Delta 9 THC is legal in 37 states in the US. Recently, many states have legalized the non-medical use of delta 9.

States Where Delta 9 is Illegal

Delta 9 THC is completely prohibited in the following states:

Start with a lower dosage of either cannabinoid. Adjust depending on your tolerance to avoid complications arising from their use. The recommended dosage for Delta 8 THC is 10 mg to 60 mg, whereas Delta 9 is lower at 5mg to 30mg. Remember that people have different body tolerances and preferences hence different dosages. Refer to dosage charts or consult a clinician to establish the correct dosage if in doubt. Beginners should buy products that have lower potency.

Delta 8 THC products are readily available in states that permit medical or recreational cannabis. With states increasingly legalizing Delta 8 THC, more products are hitting store shelves. Recently there has been a surge of delta 9 THC products after the 2018 Farm Bill guidelines. Projections suggest that this surge will increase in the future.

Some people prefer to use Delta 9 because it causes creativity and relaxation. People affected with mood swings, low appetite, and hormonal imbalance should consume fewer Delta 9 products. Choose Delta 8 if you prefer to enjoy the benefits of THC while retaining a clear head. Moreover, Delta 8 is a good alternative against paranoia caused by traditional THC. Please consult your doctor before embarking on cannabis use.

So, the Winner is Then…

Both cannabinoids have different effects despite having the same chemical structure. Both are legal on the federal level. However, not all states have legalized their use. Therefore, you should ensure that your state has legalized their use before shopping for Delta 9 and Delta 8 products. What Is Delta-9 THC?

THC stands for delta-9-tetrahydrocannabinol (Delta-9-THC). It is a cannabinoid molecule in marijuana (cannabis) that’s long been recognized as the main psychoactive ingredient—that is, the substance that causes people who use marijuana to feel high.

THC works by attaching to the body’s cannabinoid receptors, which are found throughout the brain and nervous system. THC can be detected in the body much longer than most other drug compounds (up to 20 hours after ingestion), although the psychoactive effects only last for a few hours.

THC is also stored in body fat and organs for three to four weeks. Hair follicle testing may identify THC after even longer periods of time, around 90 days. Urine testing is often used but has been found to be an unreliable method of detection.

THC is often smoked as marijuana (dried leaves of the Cannabis plant), but there are actually a number of different ways that THC can be used. It can be consumed by:

With the popularity of CBD, there has been a major market shift toward producing a seemingly endless variety of CBD products. Some of these products may contain traces of THC (around 0.3%), depending on how they’re formulated.

This small concentration is highly unlikely to result in a feeling of high, and some experts argue that the effectiveness of CBD is potentiated by small amounts of THC. However, if you’re looking for a CBD product without any THC, be sure to seek out a source that uses third-party testing to certify the purity of the product.

THC is used recreationally, but it also has a number of medicinal uses as well. Marijuana has been used for medicinal purposes for thousands of years, but research on its use to alleviate and treat illness is still relatively recent.

Some of the ailments that THC may help include:

The FDA has also approved the synthetic THC medication dronabinol (sold under the brand names Marinol and Syndros) and a drug containing a synthetic substance similar to TCH known as nabilone (brand name Cesamet). Dronabinol is used to treat vomiting and nausea caused by chemotherapy and low appetite and weight loss caused by HIV/AIDS. Nabilone is used to also used to treat nausea and vomiting.

THC stimulates the release of a neurotransmitter called dopamine in the brain, which is what can cause the feelings of euphoria we all know and love. The effects on the body however, can vary from one person to the next.

Amount of THC in Marijuana

We’re definitely not dealing with the same pot as we were in the past. This is because today’s marijuana is much more potent, with THC levels averaging 9.6%, according to the National Institute on Drug Abuse (NIDA). By comparison, in the early 1990s, marijuana generally had a THC level of about 4%.

The strength of modern “high-potency” strains of marijuana, such as sinsemilla (“skunk”), was reportedly at least four times as strong, containing about 15% THC. The amount of THC contained in marijuana varies by the way that cannabis is prepared for use, such as leaf/bud, hashish, or hashish oil. THC levels can exceed 50% in products made from marijuana extracts.

Cannabis has a long history of use that dates back thousands of years. The first recorded use of cannabis has been traced to China, where it was used for food, textiles, and medicine. Hemp was eventually introduced to Europe, and later to the Americas, where it came to use for both recreational and ritual purposes.

Cannabis was first introduced in the U.S. during the 1600s. Hemp was grown to produce textiles and was sometimes even used as legal tender. It was used for a number of medical purposes as well, but its recreational use began to grow during the 1930s and 1940s.

Around this time, anti-drug campaigns began against its use and many states passed laws prohibiting marijuana. The 1936 film “Reefer Madness” portrayed marijuana as a dangerous drug that led to psychosis, violence, and suicide.

In 1970, the Controlled Substances Act classified marijuana as a Schedule I drug, identifying it as having a high potential for abuse and making the drug illegal at the federal level.

The “war on drugs” launched during the 1970s led to the large-scale incarceration of many people for marijuana possession and use.

While it is still not legal at the federal level, many states have approved the use of cannabis and THC for medical and, in some states, recreational purposes. You should always check state laws where you live before purchasing any products containing THC.

You can find Delta-9 products at medical dispensaries in states allowing medical marijuana. Some states are allowing recreational sales of THC, which allows for easier accessibility, giving people access to purchase it at most retail establishments (such as gas stations and smoke shops). You can actually find some Delta-9 gummies and products in our retail store itself, based on weight coming to 15mg per gummy! 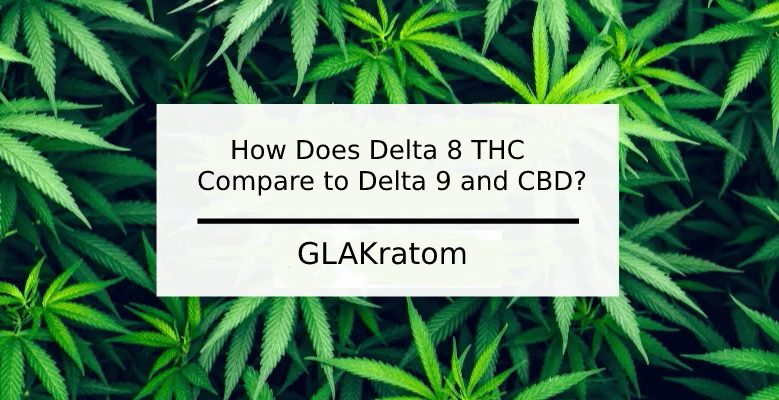 Hemp-derived delta 8 THC is the latest cannabinoid to gain the attention of veteran cannabis consumers and beginners alike. From our perspective at GLAKratom, it seems like delta 8 THC has quickly eclipsed the popularity of CBD.

CBD will not get you high like delta 9 THC does. In fact, you won’t get high at all from CBD; it’s non-psychoactive. Certainly, there are many individuals out there who don’t take CBD because they don’t like the fact that you don’t get high. But, there are probably just as many users out there who want the benefits of the hemp-derivative, and are happy with the fact that CBD doesn’t cause them to get high. We frequently meet customers who report benefits from taking our CBD-infused products (such as our Tinctures and rubs) and are happy with the fact that they can still function and think clearly after taking their daily dose of CBD.

In a way, CBD works behind the scenes, covertly in your body. Similar to how you don’t take a daily vitamin thinking that you will actually feel an effect, you should not expect to feel anything from taking CBD. What’s also great about hemp-derived CBD is that you don’t have to obtain a license to buy the CBD product from a dispensary like marijuana; in contrast, it’s readily available for purchase online, even on our online store!

Simply put, delta 8 THC is a nice blend between CBD and delta 9 THC. The big differentiator between CBD and delta 8 THC is that consumers report to “feel” delta 8 THC after they consume it. Depending on the method of consumption, these effects can be immediate (by vaping a cartridge or by dabbing), or within 30-45 minutes (by eating a gummy). Reported feelings include: clear-headed relaxation and an uplifting body sensation. Consumers report that the effects of consuming delta 8 THC can last up to 3-4 hours.

In a way, products containing delta 8 THC are a better option for consumers than delta 9 THC because consumers of delta 9 THC frequently report negative effects from the consumption of delta 9 THC, including paranoia, cloudy thinking, “couch lock” and other effects that most people don’t willingly want to pay for. What’s the point of paying for an overpriced delta 9 THC-infused chocolate that gives you anxiety?

Delta 9 THC is the active cannabinoid in marijuana that gets you high. Delta 9 THC is also present in hemp. Delta 9 THC is more psychoactive than delta 8 THC. In many states, you need a medical marijuana card to legally possess and consume delta 9 THC. Some states have legalized marijuana for recreational use. GLAKratom does not produce or sell any marijuana-derived products.

If you’re looking for a more light psychoactive feeling without the anxiety that can come with Delta 9 THC, while getting some of the benefits of CBD, especially the calming and relaxation it provides, Delta 8 THC will be a perfect match for you.

How Does Delta 8 THC Compare to Delta 9 and CBD? – Indica Vs Sativa, What’s The Difference?